Chris and  I in our india garb outside Milind’s parent’s house. They had a special wedding tent entrance up for some of the rituals and celebrations. 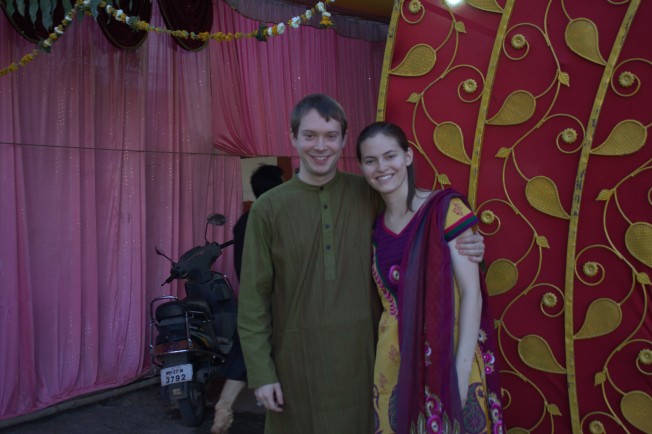 Chris waving money over Milind, wishing him prosperity in his marriage.

More dancing in the streets. 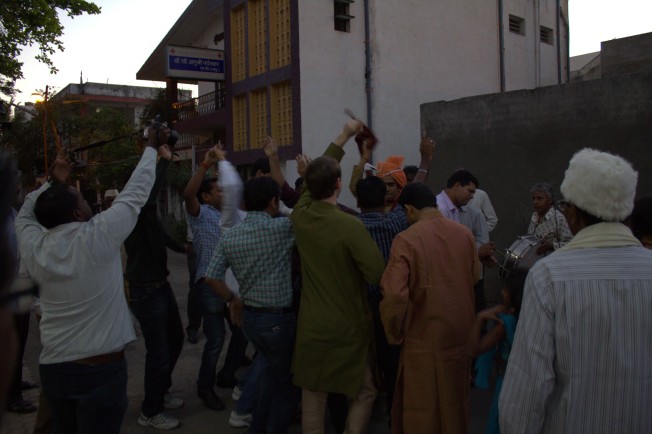 All the children gathered round as the priest sets up the rituals for the evening.

We were pretty popular with the kids.

Dinner time, we got to sit at the head table with Milind and Neha. 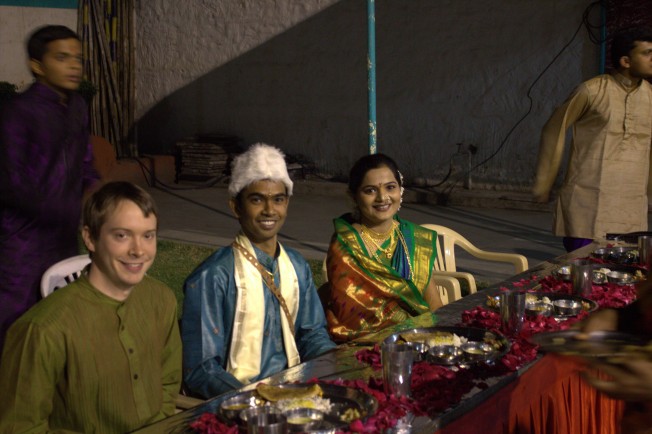 The men ate first followed by the women. Milind and Neha ate last, but I think they actually ate twice- after the men and after the women.

We took 733 pictures on our trip to India, and hope to post many more of them as well as some written thoughts in the near future. To get started, though, here are some pictures from what was very much the highlight of the trip, Milind and Neha’s wedding! 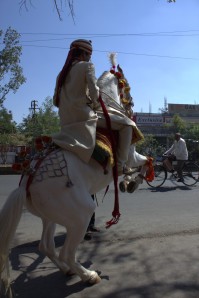 On the day of the wedding, there was a procession around Milind from the marriage venue to a nearby temple and back, with music, dancing, and a dancing horse!

After the procession, the wedding ceremony began. Here we see the bride and groom separated by a veil, and then putting flower garlands around each other.

Later there was a receiving line and while waiting our turn we took the opportunity to have a picture taken of us in our festive garb with Milind’s college friend Sunny who helped us immensely in getting to and around Milind’s hometown. After lunch more rituals followed including this presentation of a necklace.

We got slack about posting the rest of our vacation stories/pictures but now we have a deadline because we leave for India in less then a week! We have to finish writing about this adventure before we embark on another one right?

In other news today is Chris’s birthday! Happy quarter-of-a-century to him!

We spent the day taking a redbus tour of Christchurch. This took us behind the army lines into the still live demolition sight which has following the earthquakes of 2010 and 2011. In total we were told that they would have to demolish 900 buildings, 300 of which have already been taken down. This was a fascinating and eye opening tour, but not exactly fun. I found it especially sobering because I remember the earthquakes but I really had no idea the extent of the devastation.  I think it says something about how long these disasters stay in news versus how long the disaster continues to affect the area in question.

After the tour we drove up to Arthur’s Pass which was an incredibly beautiful drive where we picked up our only hitchhiker of the trip. He was an 18 year old German kid spending 8 weeks backpacking in New Zealand right after he graduated high school. The views going up to the pass were fantastic but when we arrived we had our first glimpse of bad weather and it was too foggy to see much once we reached our hotel. 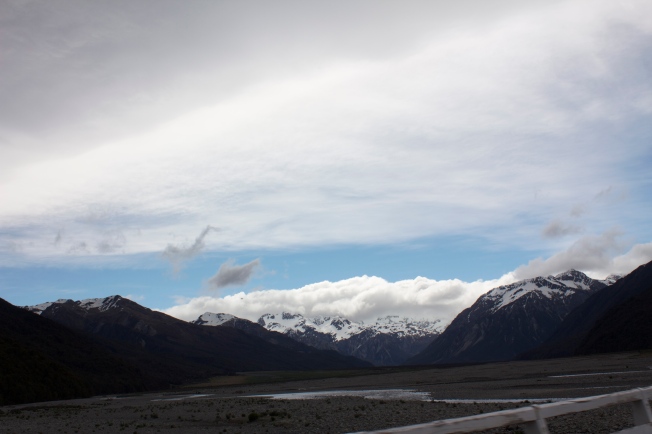 The bad weather continued the morning of the 26th as we left Arthur’s Pass and headed down the west coast towards Lake Moeraki. We stopped in one town to take a tour of a jade factory (New Zealand is the only country in the world with jade that isn’t mined, so New Zealand jade is only gathered when it is found on the ground). We bought our main trip souvenir in this town, a painted rock depicting a line of kiwi birds tramping under the moon, and also explored a couple other little shops, including one that sold all things possum fur, including nipple and willie warmers. 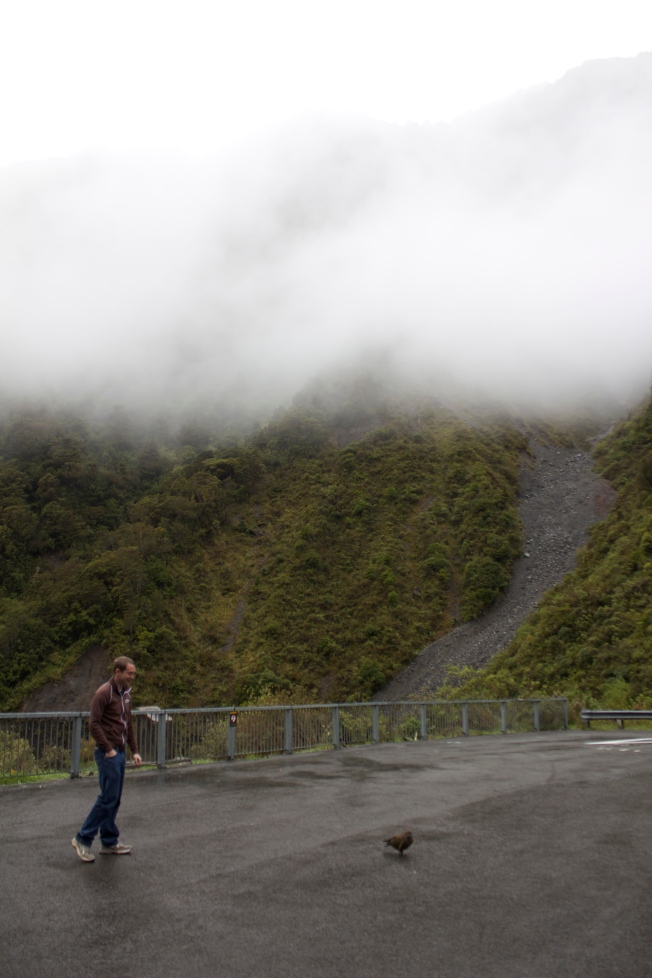 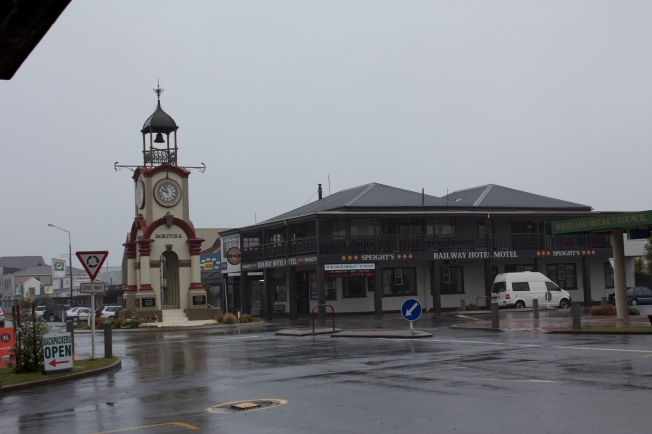 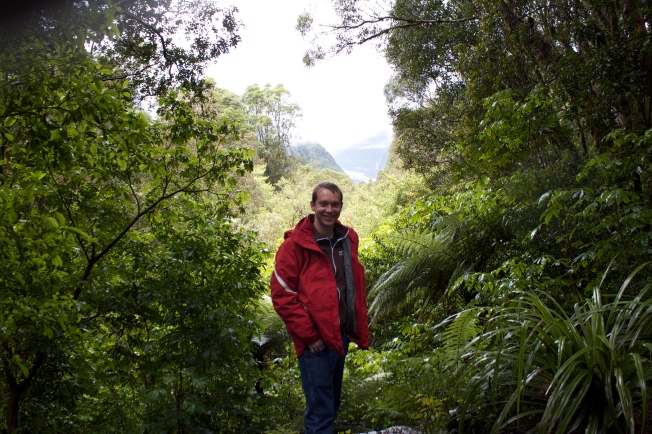 We also took a side road to get a view of Fox Glacier. It was a pretty nice view, but definitely far off. It would have been nice to have time to hike to the top, but we’re glad we didn’t because of the other festivities we had planned for the day.

Right as we were pulling into our hotel the sun came out and it was suddenly an incredibly beautiful day. We really did not have a single day which we were there that was hampered by rain of overcast weather, since this morning while we drove was the worst it got and it cleared up as soon as we wanted to go outside. 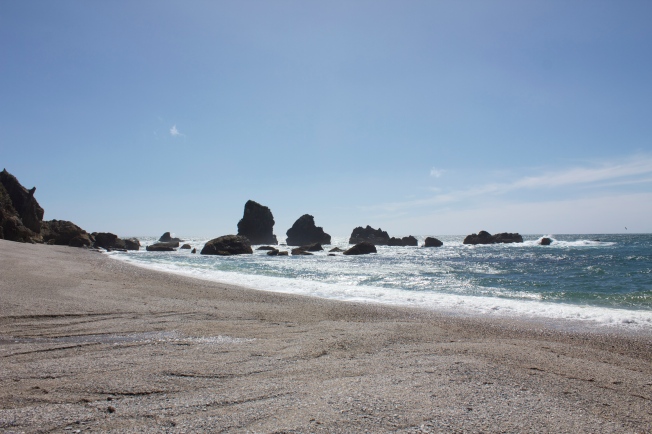 Staying at the Lake Moeraki lodge was the one big splurge of the trip (other then this place our hotels averaged about $70 a night including breakfast, this brought the average of our entire 14 night stay up to $100, but we’re still very pleased with how we did budget-wise. Lake Moeraki also included dinner and several complimentary guided tours.) but it’s also the one place we really wish we’d stay an extra night at.

When we arrived we were greeted with tea and macaroons and then made a beeline for the beach (it was about 1.5 miles through gorgeous lush rainforest) to try to spot some penguins. The beach was incredibly beautiful and we did end up spotting one penguin who got quite close while he was in the water and then entertained us from a far with his penguin waddle.

When we returned from the beach we took a short walk to the lake and then Chris jumped in with a guided bird watching tour while I went back to take a shower. At dinner we sat with a young couple from Ohio (still maybe 10 years older then us) and a retired couple from Boston. We spent the evening swapping travel stories, which Chris and I mostly listened to (I’ve been to 8 countries and Chris has been to 16 and we were definitely bringing the table average way down). The food was delicious, I think we both got venison, and it was a really nice evening. 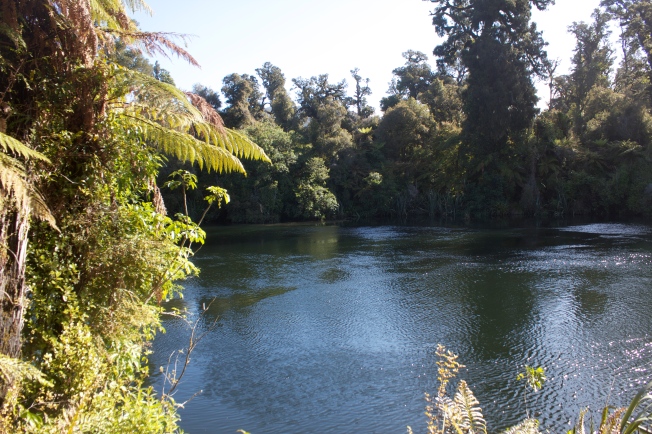 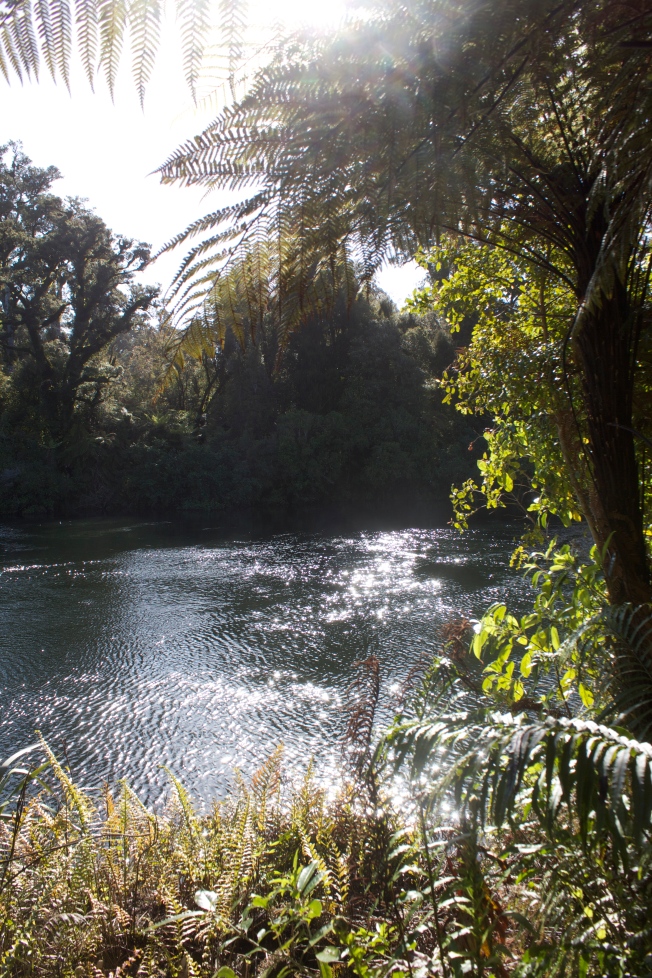 The next morning we work up early to go on a guided kayaking tour of the lake followed by a really nice big breakfast. Then we tramped back to the beach again and saw another penguin before we hit the road towards Queenstown. The Lake Moeraki Lodge offered some guided penguin spotting tours which we really wished we would have had time to do, but we couldn’t swing it and still make it to Queenstown for the night. Next time.

The drive to Queenstown was one of our longer drives and Chris let me sleep for a good section of it. We did stop at Lake Wanaka for some ice cream and to see the town. Lake Wanaka was described to us as “Queenstown 20 years ago, before it became touristy”. It was a beautiful little town and there was definitely a rouring tourist trade in Queenstown, but I think Queenstown has quite a ways to go before it becomes as undesirable as these people described it. It’s really a beautiful little town with an incredible situation on the lake and in the mountains.

That evening we had some really nice Italian just about a block away from the house where we stayed.

Queenstown was our relaxing leg of the journey (although none of the traveling really wore us out up to this point, I had feared while planning that we were covering too much mileage but I don’t think this was the case at all). We spent more time here then anywhere else and actually had a free day built into the schedule! This was so we could reschedule hand gliding in case of bad weather but we didn’t have to because the weather was glorious the entire time we were there. We spent a lot of time in Queenstown hanging out at the park or the marina, eating leisurely at cafes while reading, taking walks, and otherwise just enjoying the beautiful area. The more exciting highlights were: hang gliding, mountain biking, taking a scenic cruise of Doubtful Sound, and taking the bus to Arrowtown. Hang gliding was incredible beyond words, the mountain biking was through some of the most beautiful terrain you can imagine (but it kicked my butt, hard), Doubtful Sound was awe inspiring (we saw more penguins and lots and lots of seals), and Arrowtown was this perfectly picturesque gold mining town. 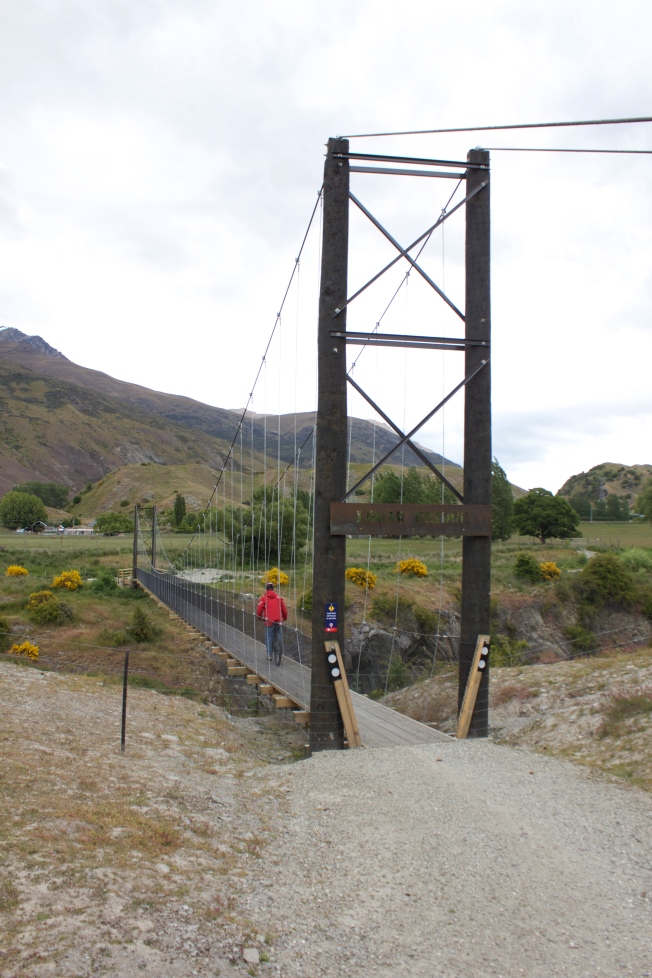 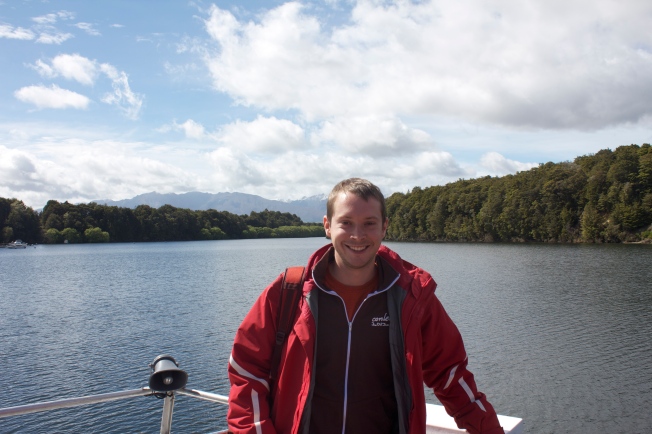 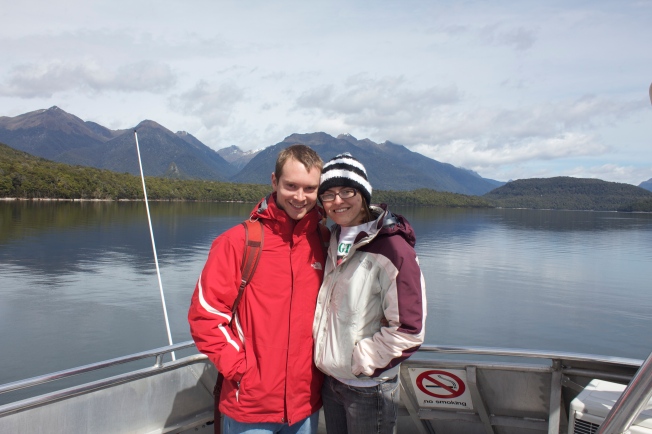 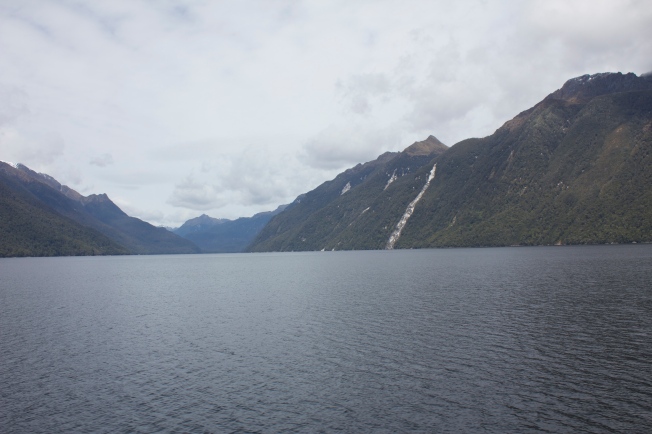 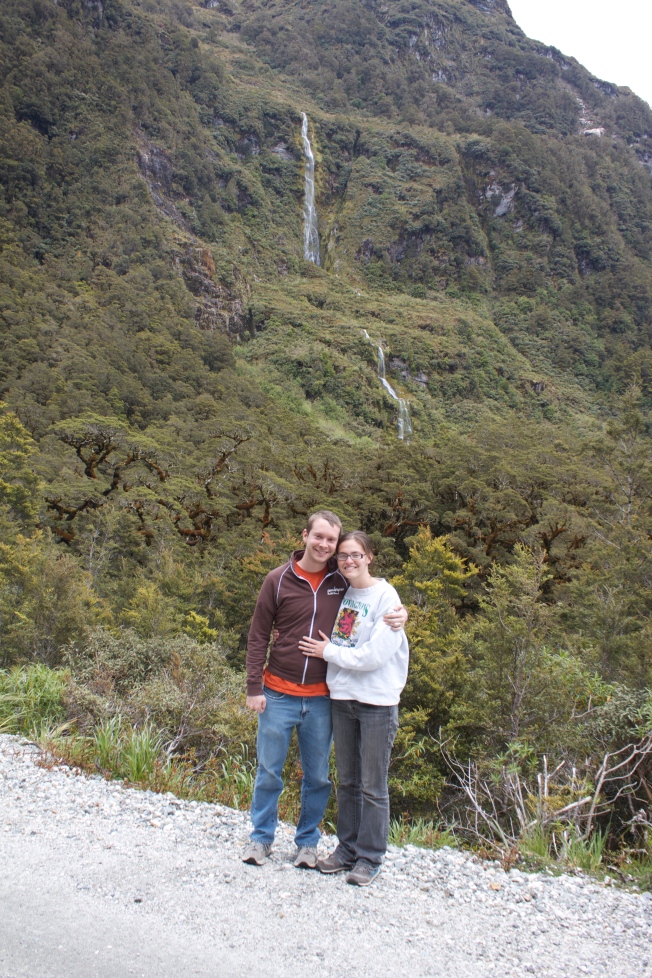 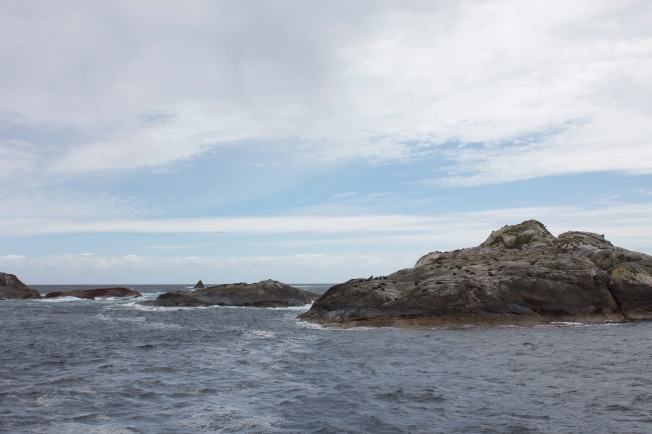 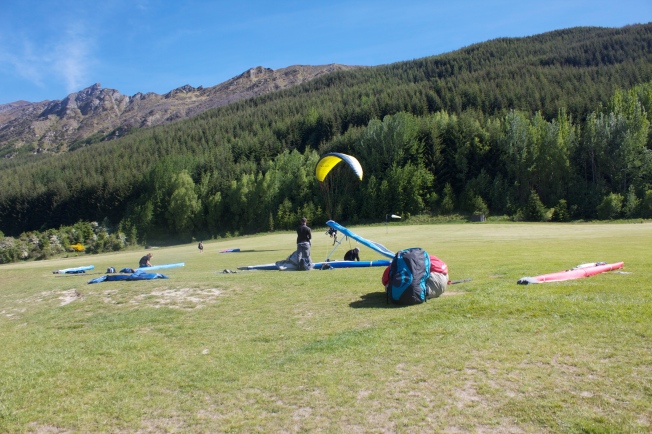 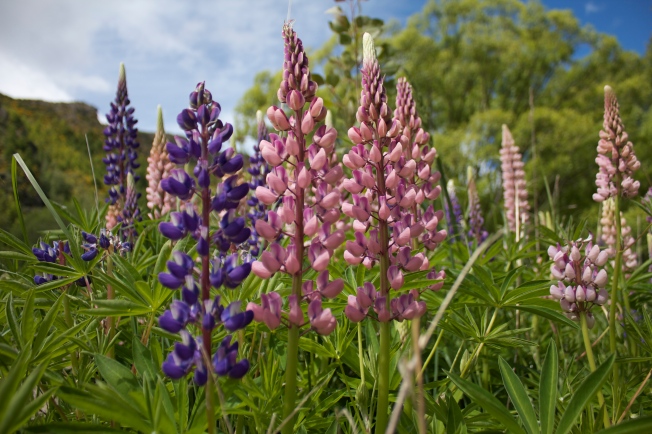 We fly home and we land in San Fransisco before we leave Auckland!