Our plans for the last day in Thailand were only cemented at 3 am this morning when we booked a taxi to Ayutthaya (pronounced U.T.I. by the locals and heard by us), the former capital of Siam that was sacked by the Burhamese. Our intention was to see elephants for Helen Jeanette who was saying for weeks leading up to the trip, ‘I’m going to Bangkok Thailand to see elephants and monkeys.’

We left the hotel at 6:30 and made the hour drive in enough time to not have to pay admission at the first temple, Wat Lokayasutharam . I don’t think this one could qualify as a ruin since it was largely intact, but it was awesome. All the dozens of Buddah’s surrounding the complex had on orange robes and there was a large reclining Buddah in stone with orange robes as well. 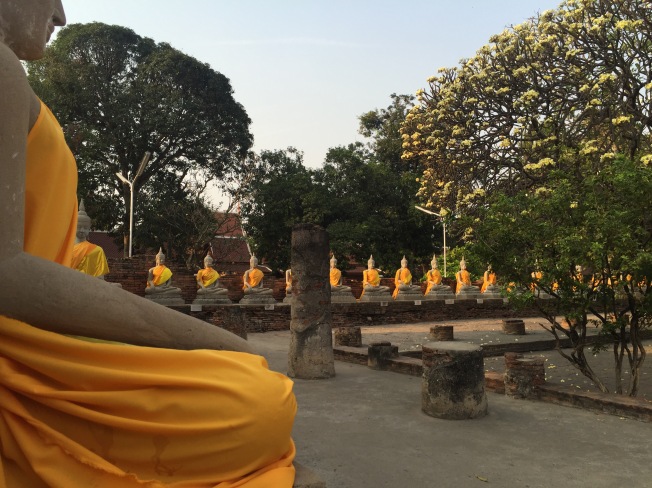 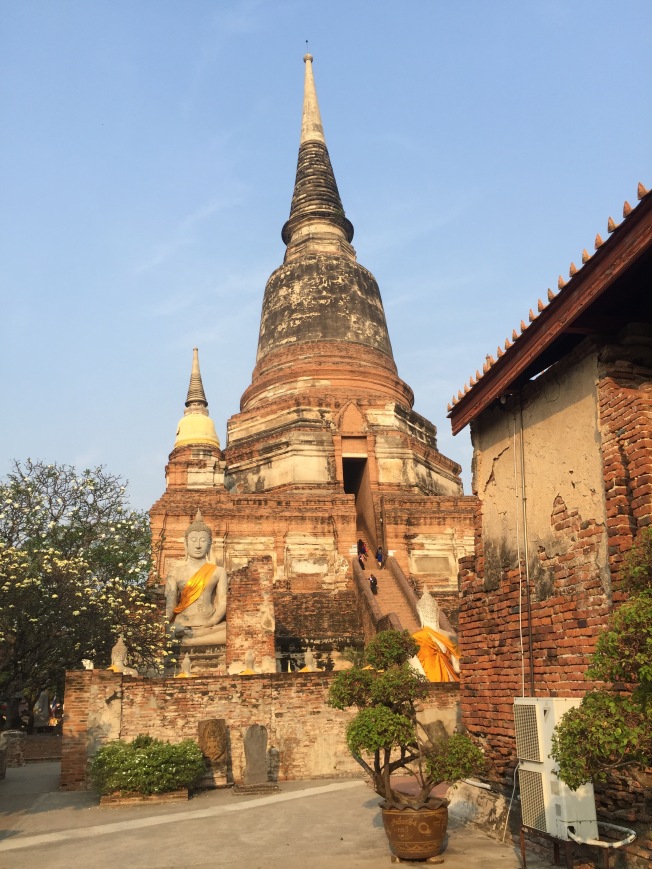 The second temple, Wat Panan Choeng, was less impressive and also wouldn’t qualify as ruins. It seemed new and quite kitschy compared to the others we had seen. This one was a Chinese Buddhist temple and you could tell by the gold lanterns and the fat Buddah. Helen Jeanette had a melt down here because she couldn’t touch anything and ended up having to go in the baby carrier, which has been distressing her lately because she ”is not a baby.” 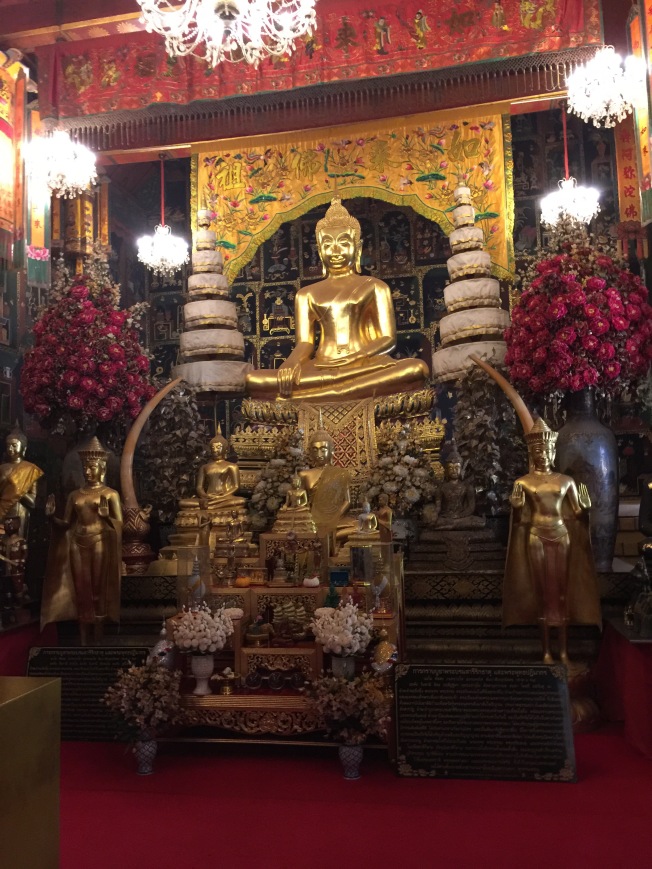 Helen Jeanette really fell apart at the third place, Wat Mahthat, which were definitely ruins. Even in the ruined state it was clearly an impressive complex in its day. We also saw the famous Buddah’s head with the tree roots grown around it.

Our next stop was elephants but we had to have a stern talk about not whining. I knew I would be so frustrated if we drove all that way and she was too tired to enjoy them. The talk was unnecessary though because she completely perked up when she saw the elephants. For 1000 baht we had 2 elephants take us around for about 10 minutes. I honestly really regret going with Killian because he wouldn’t keep still and it felt really dangerous. The driver would turn nervously any time he squirmed too much so I felt like it was affecting the elephants balance. Killian loved it but he didn’t understand why he couldn’t switch elephants mid ride or climb up the umbrella. Helen Jeanette, who was riding with my Mom, was perfectly still and floating on cloud nine. The ride itself was very bumpy and we went in the road so there were cars zipping by us.

After the ride we paid 50 baht each for 2 baskets of food to feed the elephants. Both kids loved this and were so sweet about it. The only scary thing here was that an elephant escaped and came from behind to eat the food directly from the basket. I grabbed the kids quickly but they probably would have been safe staying where they were since the elephant was only interested in the food. For me feeding the elephants was the highlight over the ride because the kids were so into it and it was so cute to see Helen Jeanette carefully alternate between elephants to be sure the food was dispersed evenly. 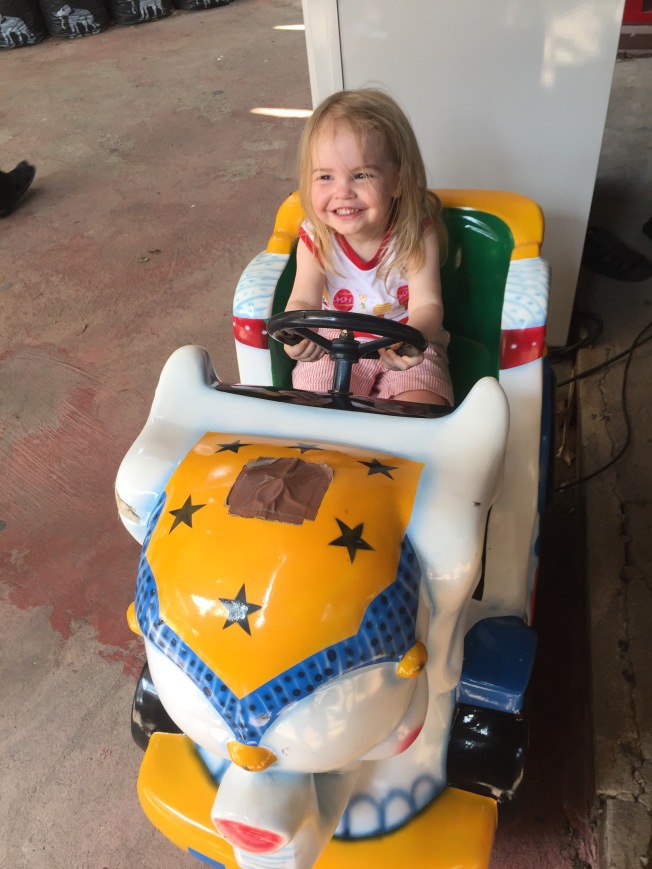 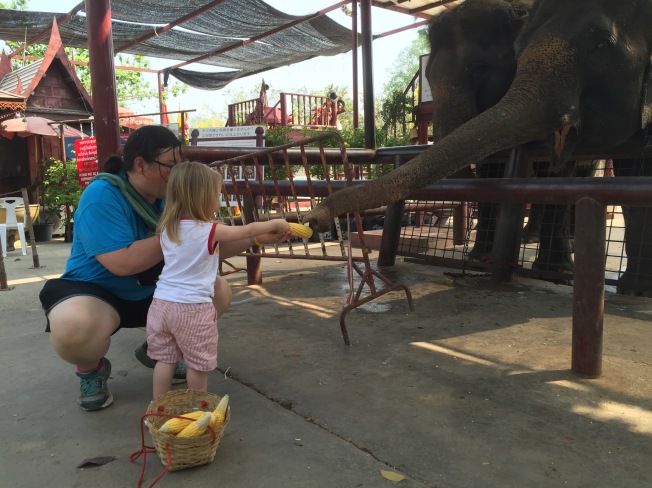 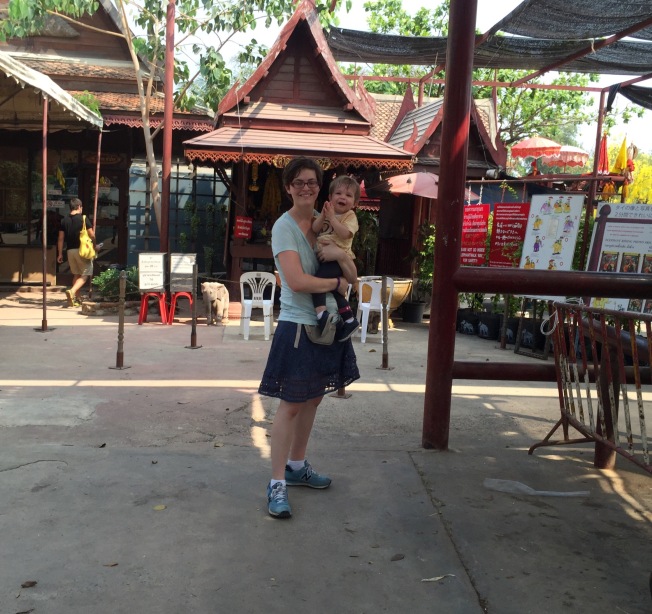 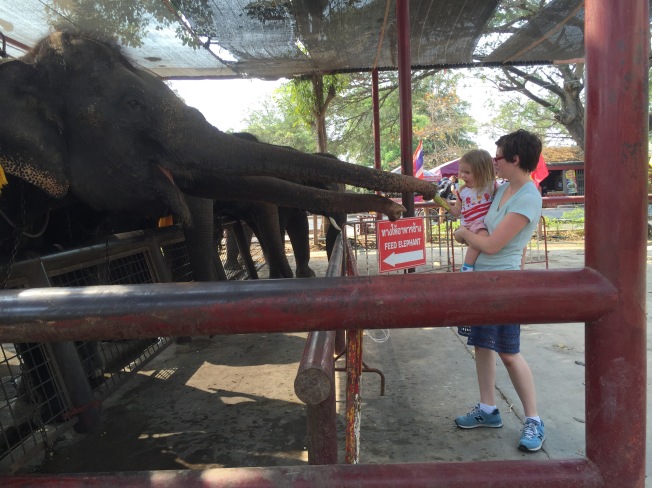 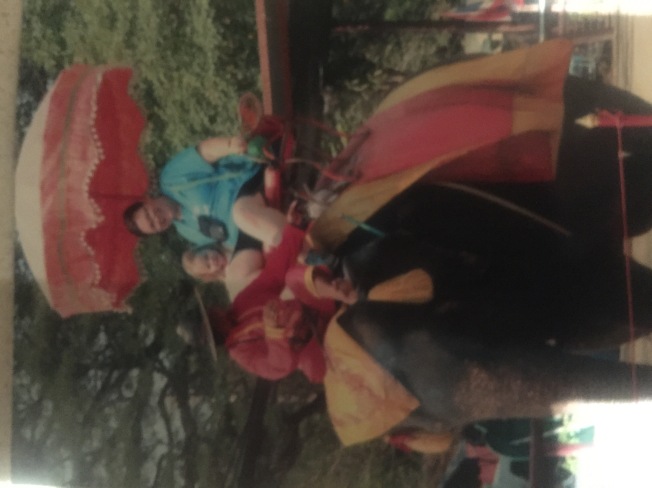 We wanted to go straight home but the taxi driver convince us to see one more ruin,Wat Chaiwatthanaram. He told us we hadn’t really been to Ayutthaya without seeing these ruins. The kids played in the sand while we took turns exploring. They were magnificent- a [much] better preserved but very similar version of Wat Mahthat.

We had a good lunch by the water and then headed back to Bangkok.

Mom watched the kids and packed while Chris and I walked a km to a mall that had a special food court which include street food. We had avoided street food the rest of the trip because of health concerns so this was a way to test out some famous Thai dishes. They were delicious! Photography was not allowed but I did sneak one picture of this pineapple drink. This was part of Chris’s only glimpse of the city, when he’s there to work he really works. He probably put in 10-15 hours of overtime, plus the travel time was a full 50 hour work week. I really wish he’d been able to get out more but I know he was happy with his conference. 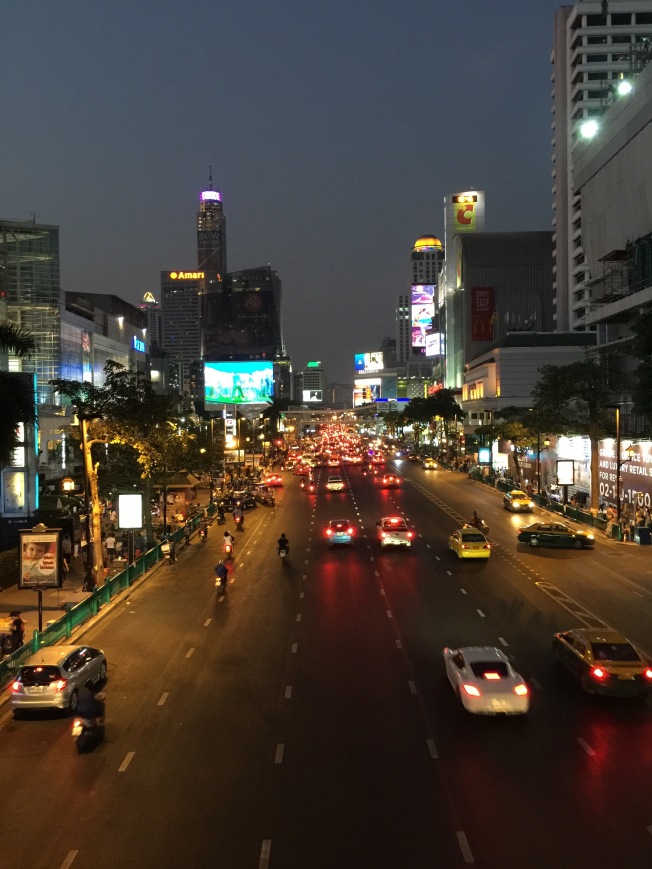 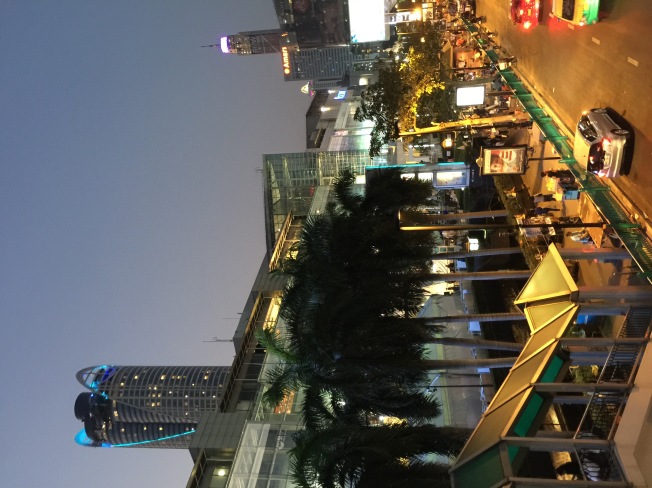